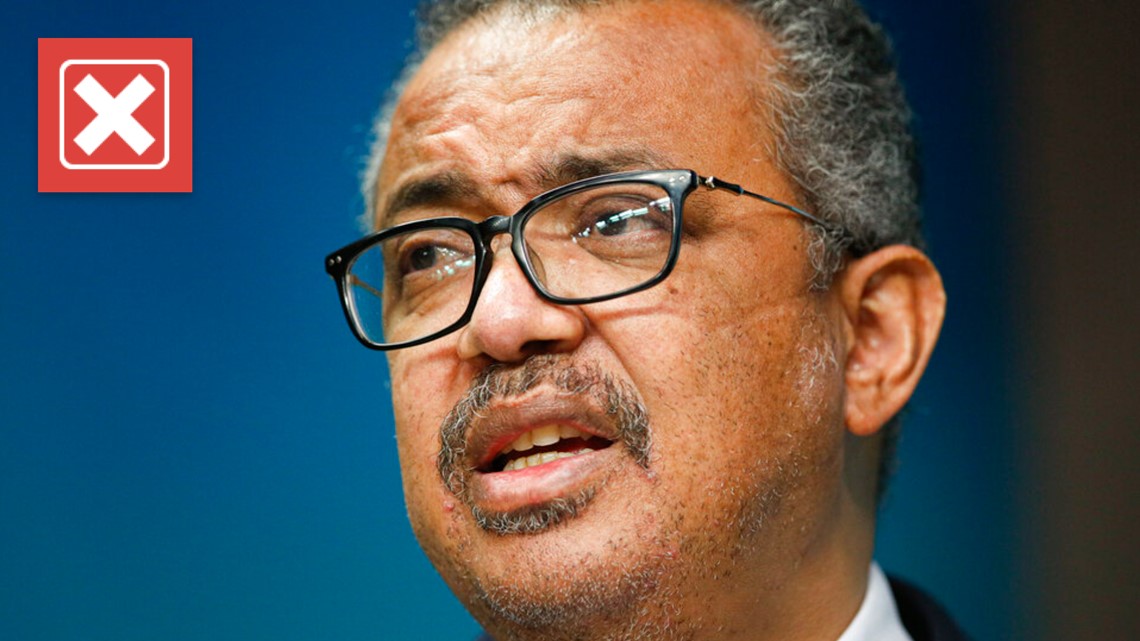 The director-general of the World Health Organization has not said he has not been vaccinated against COVID-19, a viral tweet claims.

The World Health Organization (WHO) has encouraged people around the world to get the COVID-19 vaccine since it was first made available to the public.

But people on social media are wondering if WHO Director-General Tedros Adhanom Ghebreyesus, MD, received the vaccine after a video clip appears to show him admitting he wasn’t vaccinated.

The video claims to show Ghebreyesus sitting down for an interview in which he says he wasn’t vaccinated because he “protested” until poorer regions around the world were given access to the vaccine.

“Tedros not stung? Well, who would have thought it?” reads a tweet accompanying the viral video clip. The tweet was posted on August 4th.

Tedros not stung? Well, who would have thought that? pic.twitter.com/Cf1Vt8pQm2

Did WHO Director-General Tedros Adhanom Ghebreyesus say during an interview that he was not vaccinated?

In an email to VERIFY, a spokesman for the World Health Organization said the tweet claiming Ghebreyesus was unvaccinated was “not true”.

Ghebreyesus publicly announced receiving the COVID-19 vaccine. On May 21, 2021 he tweeted a photo about him receiving a vaccination shot and wrote: “Today it was my turn to get vaccinated @Hopitaux_unige [Les Hôpitaux Universitaires de Genève] versus #COVID-19. Vaccines save lives. It is important to get them to all districts as soon as possible. If, like me, you live in a country where vaccines are available, please get vaccinated when it is your turn.”

Today it was my turn to get vaccinated @Hopitaux_unige versus #COVID-19. Vaccines save lives. It is important to get them to all districts as soon as possible. If, like me, you live in a country where vaccines are available, please get vaccinated when it is your turn. pic.twitter.com/ioNMLH5TW9

The viral video clip that claims to show Ghebreyesus is a snippet of a lengthy interview he conducted for the HBO film How to Survive a Pandemic.

The interview begins about an hour and 40 minutes into the film. (Note: Requires an HBO or HBO Max subscription to view). The film debuted on HBO and was released on HBO Max on March 29, 2022.

Ghebreyesus did not say in the film that he was not vaccinated. He said he is waiting to vaccinate until other countries have access to the vaccine.

“You know, I still feel like I know where I belong. In a poor country called Ethiopia, on a poor continent called Africa. And I wanted to wait until Africa and other countries in other regions, low-income countries, start vaccinating,” Ghebreyesus said in the interview. “So I protested, in other words, because we’re failing. I’ve seen global failures like HIV and those are the things I remember when we faced COVID.”

In March 2021, Ethiopia kicked off the rollout of the COVID-19 vaccine in a high-level national event where frontline health workers were vaccinated to mark the start of the immunization campaign, the WHO said. Ghebreyesus was vaccinated two months later.

This wasn’t the first time Ghebreyesus had gone public about vaccine injustice. In October 2021, he authored a journal article entitled “Five Steps to Solving the Vaccination Equity Crisis”. He was also interviewed for Science magazine about the “global inequality in COVID-19 vaccine distribution.”

The VERIFY team works to separate fact from fiction so you can understand what is true and what is false. Please consider subscribing to our daily newsletter, text notifications and YouTube channel. You can also follow us on Snapchat, Twitter, Instagram, Facebook and TikTok. Learn more “