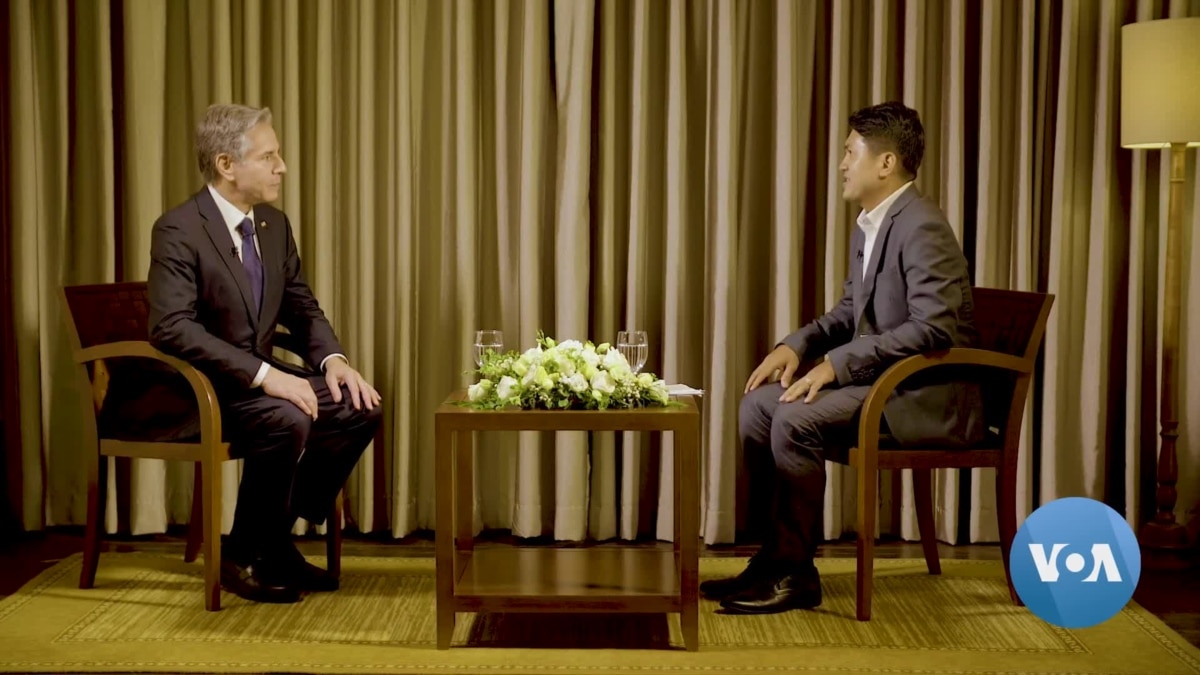 Amid rising tensions over China’s cross-strait military exercises, VOA Khmer Service reporter Sun Narin interviewed US Secretary of State Antony Blinken on Friday in Phnom Penh, Cambodia. Blinken told VOA that China’s response to House Speaker Nancy Pelosi’s visit to Taiwan this week was “disproportionate and dangerous.” He said the United States would not respond with provocative action of its own. Blinken also discussed ways to address the deteriorating situation in Myanmar, including possible additional sanctions. Blinken said the US wants a positive relationship with Cambodia and he spoke with Cambodian Prime Minister Hun Sen about the importance of strengthening democracy in the country with elections coming up next year.

The following transcript has been edited for clarity.

VOA: Two questions first before we get into the Cambodia issues. So one is about Taiwan and Myanmar. I just want to know your opinion on what you think about Pelosi’s visit to Taiwan and then there will be a reaction and also a response from China.

FLASH: Firstly, wonderful to be with you, thank you. Speaker Pelosi hails from our Legislature, which is an independent, equal government branch. And she has the right to make this visit because many members of our Congress have visited Taiwan, including this year. But regardless, China’s response is so disproportionate and so dangerous. Whatever it thinks about the visit, launching 11 ballistic missiles, including over Taiwan, and sending its ships around Taiwan. Five of the missiles he fired landed near Japan. And I think what you’re hearing from countries across the region, including ASEAN, that have made statements is genuine concern about how destabilizing and dangerous these actions can be. That’s why I think it’s very important to act responsibly. The United States will not engage in provocative actions of its own. We think the seas should be calmed. The Taiwan Strait is vital to virtually every country in the region because so much trade takes place there. If this were disrupted, it would have a terrible impact on the global economy and on everyone’s desire to recover from COVID. So I think it’s up to all countries, the United States, but also China, to act responsibly and not use the visit of a member of our Congress as an excuse for potentially dangerous and destabilizing actions.

VOA: In Myanmar we see a worsening of the situation.

VOA: Will the US impose economic sanctions on the junta, including the oil and gas company?

FLASH: Well, I think what we have seen is just like you say, a situation that has been getting worse and worse. Including the heinous act of executing four pro-democracy activists despite appeals from ASEAN, Cambodia and many others not to do so. And I think what we’re seeing is that the regime isn’t responding to any efforts to resolve the crisis created by the coup. And ASEAN has been trying for many months to implement the five-point consensus that the Myanmar regime signed but was completely unwilling to implement. Stop the violence, free the prisoners, put Myanmar back on the democratic path. Given that, we think countries need to look for ways to put more pressure on the regime – economic pressure, political pressure. They should work with all representatives of the people of Myanmar, including the Government of National Unity. We must put pressure on the regime to ensure that humanitarian aid reaches the people of Myanmar. And we should look for ways to ensure that arms do not get to the regime. So we’re going to look at everything, including additional forms of economic pressure and sanctions.

VOA: And what do you think ASEAN should do other than simply bar the junta’s foreign minister from the meeting?

FLASH: Well, I think you have to take into account that the regime refused to implement the five-point consensus and draw all possible conclusions from it. I think making sure there is non-political representation in ASEAN now is exactly the right step. But if this continues, I think ASEAN needs to look at what that means, including the suspension of Myanmar.

VOA: Regarding Cambodia, I understand that you met Prime Minister Hun Sen.

VOA: what did you tell him

FLASH: We had a broad conversation on many, many different topics. I think the most important thing I said is that the United States wants a positive relationship with Cambodia. We want to build on the good base we already have. We are proud that the United States is Cambodia’s largest export market. I’ve actually seen some wonderful producers of things like cashews and mangoes[s] with whom we work to help them reach international markets. We were very proud that during the COVID period we were able to provide vaccines, donate and help Cambodia deal with the COVID pandemic with no strings attached. One of the things I am also very proud of is that we have returned cultural heritage artefacts stolen from Cambodia and made sure that they are returned; something that is very close to my heart, the protection of culture. And so we work to deepen all of these connections. We have been working to strengthen our economic ties. But we also talked about how important it is to strengthen democracy here in Cambodia and in particular to ensure that next year’s elections are truly representative and inclusive. Cambodia has of course done this before: multi-party elections. And the United States is not for any particular person or party. We are for a process, a democratic process, that makes everyone in Cambodia feel represented in the elections and ultimately in government.

VOA: So one question: What are the possible consequences if Cambodia does not hold free and fair elections?

FLASH: Well, I’m not going to get into the hypotheses. But again, I think it’s about all of our hopes for our own relationship. This is especially important for the people of Cambodia. That’s what they want. But it’s also something the United States cares about. Our Congress does it, the President does it, it’s part of our own DNA. And we have our own challenges with democracy, but we deal with it very openly, very transparently, very directly. And that’s really all we can ask is that countries strive to have systems where everyone feels represented.

VOA: A final question concerns the Ream Naval Base. What is happening to the Chinese and US military? And will the US ask for a return visit once construction is complete?

FLASH: Well, this is primarily to ensure that Cambodia has a truly independent foreign policy and of course does not feel pressured by anyone. And when it comes to the Ream Naval Base, I think countries across the region would be very concerned if any country had exclusive control or use of any part of the base or did anything there that undermined the security of other countries in the region . So I think it’s important to have transparency and make sure the grassroots is open to everyone and not just one country.