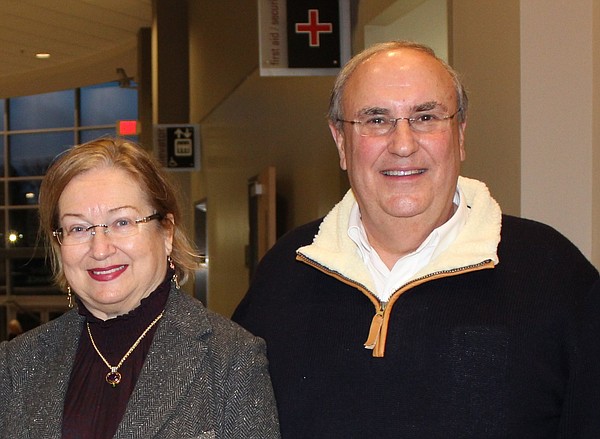 The Foundation’s executive director, Damon Cluck, said, “We could not fund the programs that we set out and her contract indefinitely.”

Catherine Johnson has been receiving $70,000 to $10,000 a month since Jan. 1 under her agreement with the Arkansas National Guard Foundation and will receive $30,000 in severance pay on Aug. 1 under the terms of the agreement, Cluck said in a statement Interview.

He said Catherine Johnson was paid out of the foundation’s earnings — which have fallen in value from about $1.5 million to about $1.3 million since Jan. 1 due to turbulent investment markets — and that the foundation can not maintain their programs and their monthly contribution. He said Catherine Johnson was informed on Wednesday night that the board had terminated the agreement.

“She’s done a lot of great things for us,” Gluck said. “She has helped us mature our organization.”

He said he only met Mark Johnson once.

“We are not political,” said Gluck.

Mark and Catherine Johnson declined to comment Friday on the termination of their agreement with the Arkansas National Guard Foundation.

Cluck confirmed the termination of the foundation’s agreement with Catherine Johnson a day after the Legislative Council on Thursday delayed action on Gov. Asa Hutchinson’s administration’s request to transfer $5 million in state-restricted reserve funds to the Arkansas National Guard Foundation .

In addition, the Legislative Council on Thursday delayed action on requests from the Hutchinson administration to transfer $750,000 in state rainy day funds to support World Services for the Blind in Little Rock and giving the State Division of Heritage spending authority to authorize the Attorney General to donate US$250,000 of proceeds from the trial settlement to the Sultana Historical Preservation Society in Marion.

The council’s action comes after Mark Johnson told lawmakers that Catherine Johnson is a registered fundraising attorney who advises the three groups on their fundraising and he filed a disclosure of his potential conflict of interest ahead of the council meeting.

A subcommittee vice chair, Sen. Jonathan Dismang, R-Searcy, told lawmakers Thursday that the three requests for state funds were withheld by a subcommittee on Tuesday because it was brought to his attention that a spouse of a lawmaker for the three companies involved, which would receive state funding under these applications.

He said he wanted more information about the nature of the relationship between the spouse and the groups and that he had not received all of that information and that the subcommittee would consider the requests next month. He then clarified that Catherine Johnson is a fundraising attorney and not a lobbyist.

Secretary of Treasury and Administration of the State Department, Larry Walther, requested Council approval for the transfer of $5 million in committed reserve funds to the Department of Military for the Arkansas National Guard Foundation, Arkansas National Guard members charitable and educational support offers. and their families and survivors, as well as to veterans and other nonprofit organizations that support veterans’ communities in Arkansas.

Hutchinson requested council approval for a transfer of $750,000 in rainy weather funds to the Arkansas Rehabilitation Services of the State Department of Commerce to assist World Services for the Blind in the renovation of their campus used as a group home for the blind.

Walther sought council approval for a new cash allocation for the State Division of Heritage to disburse $250,000 from prosecutors to the Sultana Historical Preservation Society for the Sultana Disaster Museum in Marion.

In a letter Thursday to Legislative Council co-chair Sen. Terry Rice, R-Waldon, Mark Johnson said he would respectfully withdraw from the discussion and would not vote or vote “present” on the Arkansas National Guard Foundation funding proposals . the Sultana Disaster Museum and World Services for the Blind “to ensure compliance with potential conflict of interest disclosures under Senate Rule 24,” which is a rule of ethics.

The Bureau of Legislative Research released the letter on Friday.

Johnson said in a separate letter Friday to Dismang that he submitted a Sept. 18, 2020 letter to Senate Secretary Ann Cornwell detailing his potential conflict with an action related to Philander Smith College, World Services for the Blind and disclosed to the Sultana Historical Conservation Society.

He said his wife’s contract with the Arkansas National Guard Foundation was a 2022 agreement, and “up until Tuesday, I wasn’t aware that a funding application was pending [the Legislative Council’s Performance Evaluation and Expenditure Review Subcommittee].” After the subcommittee’s action, he said he submitted his letter to Rice.

Any entity requesting grant funding from the state should provide the requested information to the relevant legislative committees, but “their legitimate requests should not be delayed or withheld because of erroneous information,” he wrote in his letter. “I believe this to be a correctable error and I respectfully request your cooperation in such a correction.”

Dismang said Friday he had no opportunity to review Johnson’s letter.

Sharon L. Giovinazzo, president and chief executive officer of World Services for the Blind, said Friday that Catherine Johnson began working for the nonprofit group in January 2019 and has received a total of $349,000 for her services.

“Catherine’s rate is competitive with the others I’ve interviewed, especially because of the experience she brings to the table,” she said. “It was always a lump sum, and it was paid for out of our operations, not what was collected.”

Giovinazzo said in a written statement Johnson would “no way!” be paid from the $750,000 in emergency federal funds requested for World Services for the Blind. She said the group has significantly increased its fundraising with the support of Catherine Johnson.

According to records in the Office of the Secretary of State, Catherine Johnson’s arrangement with the formation of the group relates to the reinstatement of the previous $8,500 monthly consulting fee effective September 1, 2021 until the Group Home campaign is completed.

Marion’s John Fogleman, executive chairman of the Sultana Historical Preservation Society, said Catherine Johnson has been working as a fundraising consultant for the group since May 2020 and receives $8,500 a month from funds from the Marion Advertising and Promotion Commission.

The group aims to raise $13 million for the Sultana Disaster Museum, including $3 million for a foundation, and has raised $5.3 million so far, said Fogleman, a retired circuit judge.