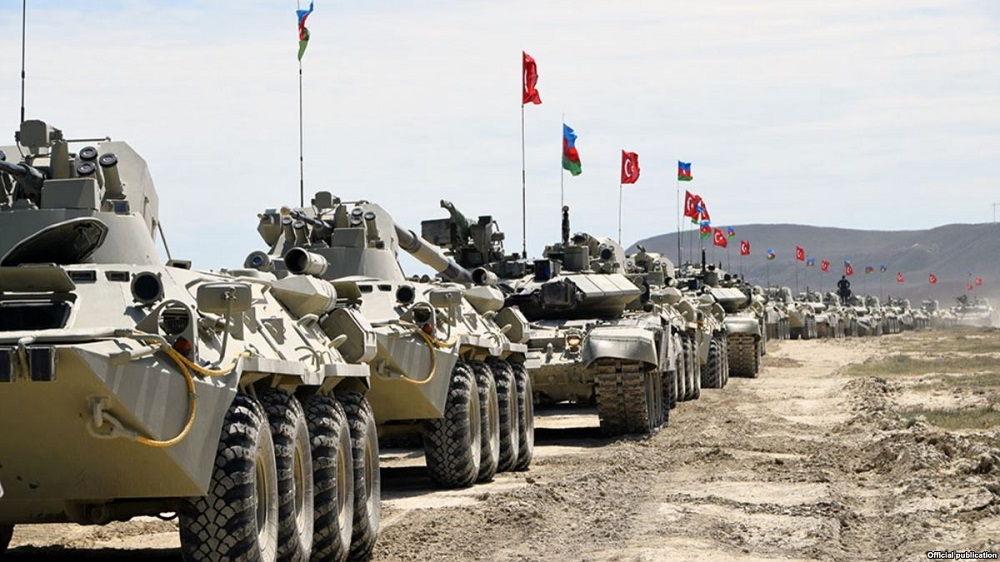 “The goal of Iran and Russia is to oust Turkey from at least two countries — one from Syria, the other from Azerbaijan,” Azerbaijani political observer and security expert Arastun Orujlu said in a recent bombshell interview. In his view, Iran and Russia could not achieve acceptable results at the meeting in Tehran. “In effect, this means the exhaustion of diplomatic efforts,” Orujlu claims. “The danger of war is clear,” he added.

“Diversionary groups against Azerbaijan are being formed in neighboring countries. This statement is not based on rumors. I have reliable information about it. I even have information about who is involved and which former senior Azerbaijani military were recruited under the guise of Russian-Azerbaijani diaspora activities,” Orujlu said.

According to Orujlu, there is confirmed information about a youth training network spanning Russia, Iran and Azerbaijan.

“More or less what happened in Kazakhstan”

Arastun Orujlu noted that the purpose of sabotage groups is to destabilize the country:

“Your task is to steer socio-political processes in a direction that serves their state or semi-state masters. At the same time, their task is to create confrontation in society, subversion. More or less what happened in Kazakhstan.

“This strategy was used in Kazakhstan in January this year. Rebel groups suddenly appeared under the guise of social demands, and it was no coincidence. Ultimately, they created a situation that forced Kazakhstan to turn to Russia and the Collective Security Treaty Organization (CSTO) and ask them to send in troops to maintain stability and power in the country.

“The intentions and plans behind it can only be guessed at. I don’t want to make any guesses. However, the prompt reaction of Russia and the CSTO showed that they had prepared for this situation. You can do the same in Azerbaijan.”

“The Azerbaijani authorities are aware of this”

Orujlu has no doubt that the authorities are aware of what is happening and Baku is trying to counter the threat through various means.

“At least the behavior of the Azerbaijani authorities shows that they have such information. How effective their measures are is another matter.

“For example, explaining the closure of land borders as a threat from COVID is dubious. In fact, the point here is to prevent such sabotage groups from entering the country. But this is ineffective, because the closure of the land borders leads to an increase in tensions in the country. And the states that manage and direct these saboteurs can take advantage of this heightened tension at the expense of the nation,” Orujlu said.

“The danger of war is clear”

The political observer noted that the danger of war in the region was unmistakable.

“After the meeting in Tehran, it became clear that Iran and Russia on the one hand and Turkey on the other cannot come to an agreement. Because the goal of Iran and Russia is to oust Turkey from at least two regions. One of them is Syria, the other Azerbaijan. This didn’t work either. In fact, this means the exhaustion of diplomatic efforts.

“In addition, we saw that after the meeting in Tehran or shortly before, the head of the Russian foreign intelligence service, Sergey Naryshkin, visited Armenia and Azerbaijan. His visit to Azerbaijan was very strange, to say the least. Although he held a press conference, pro-government media barely reported the visit. There were reports about him only on some sites and resources related to Russia.

“In politics, diplomats work first, then politicians, then intelligence officers, and then the army comes and joins the process. In my opinion, the first three resources have already been exhausted.”

“There is a threat, but that doesn’t mean there will definitely be war. Azerbaijan is not alone. Turkey and Azerbaijan have signed an agreement on military and security cooperation. The Shusha Declaration is a very comprehensive document. It has been ratified and is legally binding. In any case, it is important not to lose vigilance. You have to be prepared for every situation.”

“Everything is possible in Azerbaijan”

At the end of his detailed interview, the security expert emphasized that everything is possible in Azerbaijan.

“It is possible to violate internal stability and to commit subversive actions for this purpose. For example, from attempted murders of individual politicians, journalists, well-known public figures and politicians to movements that start with social demands and then degenerate into riots. Agitation is also possible on the Karabakh front,” he said.

At the end of the interview, Arastun Orujlu outlined a way to avoid tragic consequences.

“The only way to avoid this is to first stabilize the socio-political situation in the country. This does not happen through arrests and repression, but through civil society understanding. So far there have been no such initiatives on the part of the authorities. It is not recognizable in the opposition either. Because the government has its own approach and even its own opposition. That’s irrational. The initiative should come from the government here, but as I said, it doesn’t look like it. Unfortunately, this increases the risk,” added the observer.