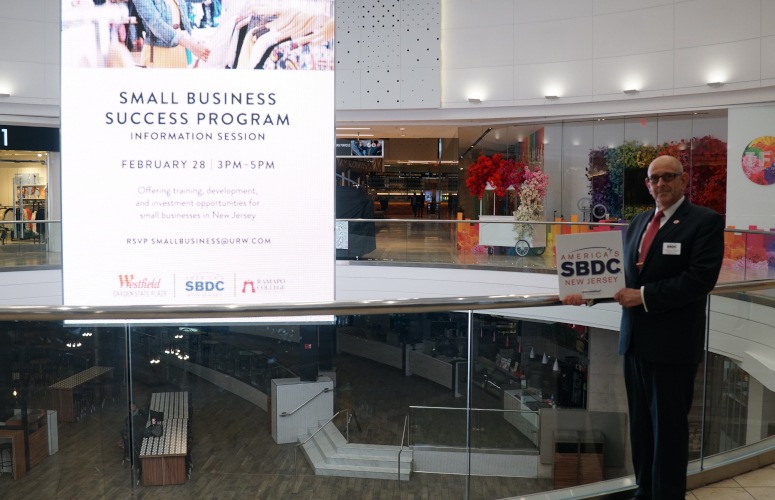 The Westfield Garden State Plaza mall in Paramus has partnered with the New Jersey Small Business Development Center (SBDC) at Ramapo College to create the Small Business Success Program, which gives small businesses, either established or startups, the opportunity to open a kiosk for lease or inline retail space in the 2.1 million square foot mall.

The rental conditions are favorable for companies that want to test their business concepts in a shopping center. According to Tiffany Ramirez, marketing director for the mall, which is owned by France-based Unibail-Rodamco-Westfield, small businesses can take out leases for one to three months or longer.

“You can’t do that if you were a business on Main Street downtown, where a business would have to commit to at least an annual rent,” explains Ramirez.

The rental costs vary from company to company. According to Vince Vicari, regional director of SBDC at Ramapo College, rental factors can include the size of the space needed, the location within the mall and the type of business seeking space.

Launched in February, the program and two informational sessions have attracted the attention of about 400 businesses, according to Ramirez, who adds, “We’re bringing Main Street to the main stage by offering small, locally owned businesses the opportunity to sell their wares to showcase and services alongside some of America’s most recognizable brands.”

Aware that some small businesses would need help expanding their business models and plans to qualify for a mall location, Ramirez turned to the SBDC at Ramapo College for assistance. A partnership immediately developed.

According to Vicari, Ramapo SBDC had been wanting to set up a similar program for some time, “so when the opportunity arose, I jumped at it.” Line and sinker” “jumped”.

In the partnership, the SBDC is responsible for preparing a company for the mall environment. “We conduct assessments and help develop business plans,” says Vicari. “We know what it takes to start a business… to have all your ducks in a row. It’s everything from the business model to the finances.

“Is the company able to market properly? Is the product supply

mature enough so that when the business takes off, it will be able to fund and obtain the materials it needs to thrive? Does it have the right insurance? … It’s about the due diligence that needs to be done beforehand

A company engages in a professional retail facility,” explains Vicari. “We want to keep entrepreneurs and small businesses in the safe zone. We want to keep them out of the moshpit of challenges that can plague any business.”

“When they come here, they get a 360 degree marketing program and an operations team to help them succeed. The company also has access to our social media channels and platforms,” she says.

According to Ramirez, other advantages of locating a business in the mall include the continuous foot traffic, plenty of parking and the security of the mall. In addition, the company would operate in one of the top 10 manufacturing malls in the country, which attracts more than 18 million visitors annually.

A handful of small businesses are already based at the mall, including: Chic Sugars, an Englewood-based specialty bakery that has been in business for more than a decade and operates a kiosk; and Tonni’s Minis, a Newark-based dessert bakery that also operates a kiosk.

Ramirez says current inline store space is limited, but a variety of kiosk options are available.

Vicari hopes to replicate the program at other malls across New Jersey. Meanwhile, Unibail-Rodamco-Westfield plans to roll out the program at its other US malls.