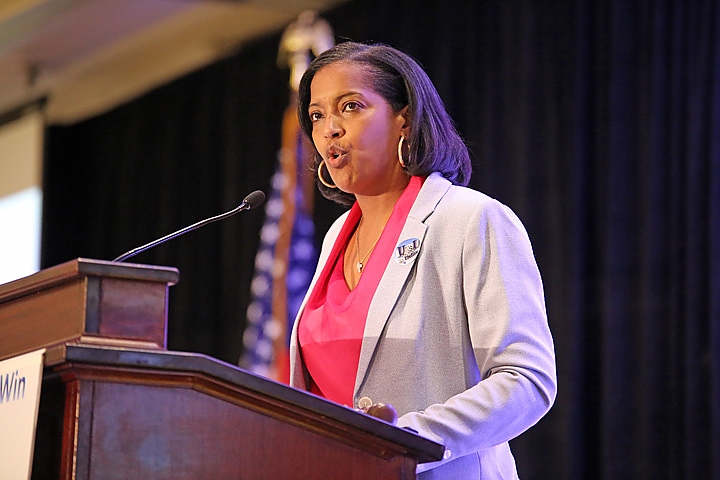 Incumbent Democrats in all five of Connecticut’s congressional districts outperformed their Republican challengers in the fundraising quarter that ended in late June, according to federal campaign financial reports.

Fundraising was most competitive in the state’s 5th Circuit, where two-year Democrat Rep. Jahana Hayes brought in about $340,000 in donations, more than three times that of George Logan, a Republican former state senator who raised about $102,000 Dollar rallied three month period.

While Democrats have held all five seats since 2006, the fifth has long been seen as Republicans’ best chance of flipping a seat in traditionally blue Connecticut.

Hayes won re-election with about 55% of the vote in 2020, but the race has garnered national attention this year, and earlier this month political forecasting website FiveThirtyEight called the race a “toss-up,” which Logan called “proof of that.” , that the momentum is building up,” explained Unser

campaign and our message is resonating with voters.” On Monday, however, FiveThirtyEight predicted the race was tilting slightly in Hayes’ favor.

Fundraising gaps were wider in the state’s other four counties.

In the 1st District, Rep. John Larson raised approximately $291,000 in his campaign for a 13th term. Republican challenger Larry Lazor, a West Hartford doctor, lagged far behind with contributions of less than $14,000. Muad Hrezi, a Democratic challenger who failed to secure a spot on the ballot, overtook Lazor with more than $57,000 in donations.

2nd District Rep. Joe Courtney reported donations of over $408,000 for the quarter. Mike France, a Republican state representative from Ledyard, received approximately $122,000 in donations during the quarter and lent $10,000 to his campaign.

In the 3rd District, US Rep. Rosa DeLauro, who has represented the district since 1991, raised approximately $227,000 in campaign funds. Republican Lesley DeNardis, a former Sacred Heart University professor, received just over $10,000 in donations.

US Rep. Jim Himes raised approximately $244,000 in his 4th Circuit re-election campaign. Two Republicans are vying for the nomination to challenge him, and none came close to his fundraiser.

Former Darien First Selectman Jayme Stevenson, who won delegate approval at the May convention, raised about $58,000 in donations and lent $100,000 to her campaign. During next month’s primary, Stevenson will face Michael Goldstein, a Greenwich doctor who raised about $8,000 in the quarter and loaned his campaign $149,000.

Candidates in all five districts will have the opportunity to compete in moderated debates ahead of November’s election. Connecticut Public and the Connecticut League of Women Voters announced a debate schedule Monday that includes all congressional elections in addition to this year’s U.S. Senate, governor, and secretary of state races.

Republicans had a more competitive fundraising quarter in the US Senate race, with Themis Klarides, a former House minority leader, raising about $416,000. Klarides’ quarterly total was just under the net $432,000 brought in by incumbent US Senator Richard Blumenthal. However, while Klarides’ campaign had approximately $462,000 available at the end of the quarter, Blumenthal’s had more than $8.3 million.

Klarides also faces two main challengers in Leora Levy and Peter Lumaj, both of whom hold more conservative positions. Neither of them reached the donation numbers of Klarides. Leora received approximately $221,000 and lent her campaign $300,000. Lumaj raised about $65,000 and borrowed $8,000. Of the three Republicans vying for the nomination, Levy ended the quarter with the most available funds at approximately $636,000.

Connecticut Public and the Connecticut League of Women Voters are hosting a debate with US Senate candidates on October 25 at Fairfield University.