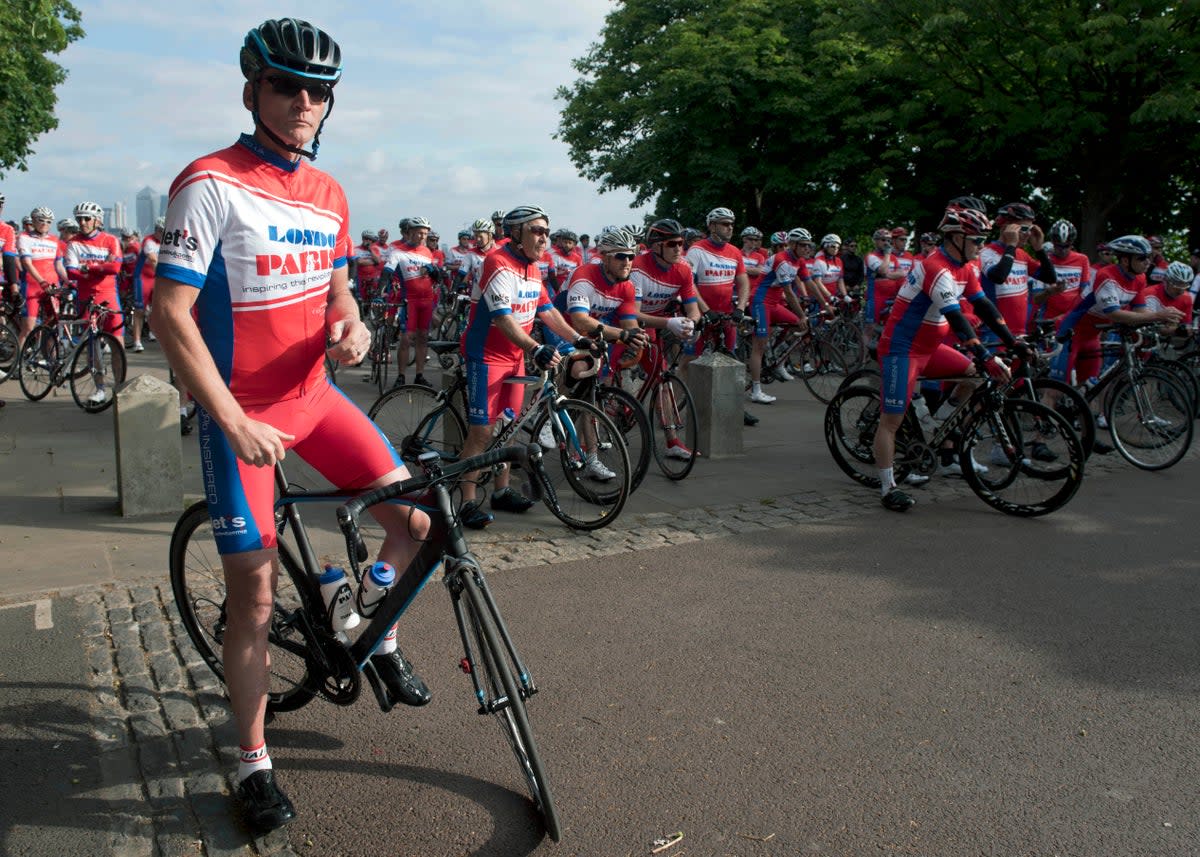 The Tour de France concludes on Sunday and while ex-Crystal Palace captain Geoff Thomas saw his last bid to finish the 2,000-mile course early before the Alps, he is determined to once again close the finish line on the Champs-Elysees cross.

The 57-year-old dropped out of his sixth attempt at the grueling 21-stage challenge after a week due to pain in both knees where he suffers from grade 4 arthritis.

Although disappointed not to have finished the charity ride, which takes place a week ahead of the pros at the Tour de France, Thomas watched from his home in Worcestershire as the Tour 21 group he put together completed the order, almost Raise £1million for Cure Leukemia.

Thomas’ own fundraising efforts since being diagnosed with the disease in 2003 resulted in him receiving an MBE in March, with the millions generated by the former England midfielder playing a big part in the search for various treatments.

But having contemplated putting the bike away for good, he now has one goal in mind before hitting a milestone in 2024.

“Personally, I’m not giving up yet,” he told the PA news agency with a broad grin.

“I said last year was my last but we had a guy who has pledged to raise £100,000 this year if I do it with him. I fulfilled that by starting with him, I didn’t stop with him! But Mark (Palmer) will continue to support us.

“I stopped thinking when I got off the bike, but if I can fix my knee there’s a big number ahead. I don’t even think about age anymore, but I’ll be 60 in a few years. In my head, I’m thinking maybe six and on, something like that.

“It might be my last but I’m really like Frank Sinatra because since 2005 I’ve been saying ‘never again and this is my last’ but I think I might have one left in me. We will see.”

When Thomas amazingly cycled the Tour de France route in 21 days in 2005, just months after being declared in remission, he was awarded the BBC’s Helen Rollason Award for Sports Personality of the Year.

Two years earlier he had been told his diagnosis of chronic myeloid leukemia would give him about three months to live, but successful stem cell treatment – by Nurse Kay – combined with radiation and chemotherapy helped the former Crewe ace beat the cancer defeat.

It might be my last but I’m really like Frank Sinatra because since 2005 I’ve been like, “Never again and this is my last” but I think I might have another one in me. We will see.

Thomas then proceeded to repay his adviser, Professor Charlie Craddock, with the peloton in a surprisingly chosen method.

“I’m very proud of where it came from,” he said. “Partnering (official UK charity) with ASO itself, the Tour de France, is a credit to all involved and we have been recognized as a charity that has put on a great event in the world of cycling.

“And for me there is no greater challenge than Le Tour, in any sport, I believe.

“The event itself, in 2005, was the first indication that I had regained some normality in my life. I will never forget the day on the Col du Galibier. It was like after two years of treatment and a stem cell transplant I would have my life back on track if I can do this.

“There are so many people going through a battle with cancer and it’s not the end game. It can be a fresh start. For me it made me evaluate what is important in life and health is number one.”

Old Club Palace helped Thomas on his road to recovery with “thousands” of messages sent by fans to the skipper of the 1990 FA Cup runners-up.

Almost two decades later, it was the late Geoff Hill, a supporter of the Eagles, who inspired Thomas to get back on his bike this year, and had fate been otherwise he could have crossed the finish line and then traded Paris for Perth Take part in Palace’s Pre-Season Tour Down Under.

“Steve Parish called me to see if I could go as an ambassador,” revealed the stalwart of 249 appearances. “If I had stayed on the bike I would have gone to Australia two days later and I don’t think that would have gone over well with the woman!

“But Crystal Palace’s status is growing and you only get invited to places like this if you have a team to watch.”

The Eagles helped Thomas with his fundraisers this summer by donating their shirts from the 1-0 win over Watford in May to Cure Leukemia, with Wilfried Zaha’s match-worn shirt raising £1,129.

Thomas also met the squad and was very impressed after a chat with boss Patrick Vieira, who guided the side to the FA Cup semi-finals and 12th place in his debut season.

Thomas added: “Patrick was such a nice guy. He’s a world champion and you expect a certain ego, maybe you’re tainted by others, but he was such a gentleman and a nice guy.

“Roy (Hodgson) has laid a solid foundation there for Patrick to come in and work with and the style change is more appealing to fans.

“The atmosphere down there is awesome. I have never been on a floor that is so narrow and so noisy. I’m sure it will rock again this year.”