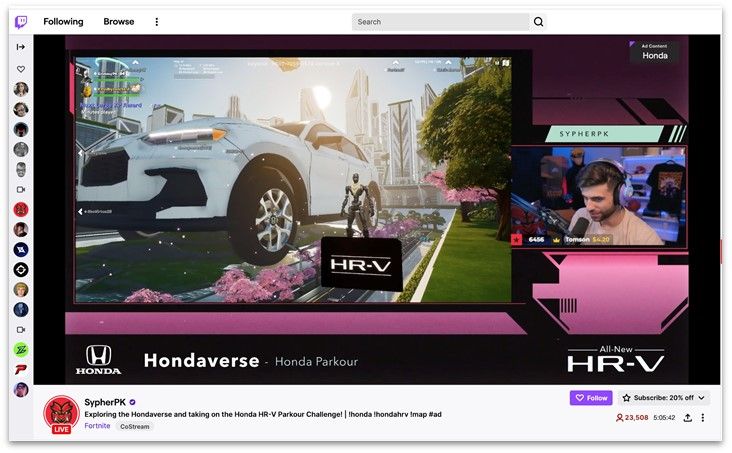 Today, popular gaming streamer and YouTuber Ali “SypherPK” Hassan announced the opening of a dedicated Fortnite Creative mapmaking division at Oni Studios, the content creation studio and consulting firm he founded in January. The new company aims to lower the barrier to entry for brands interested in the Metaverse by merging the production and distribution sides of this burgeoning marketing channel.

Oni Studios’ Fortnite mapmaking team currently consists of three full-time employees, with plans to grow to 15 by the end of 2022 and hire a broader network of contractors. The new department has been in development for about a year. Until now, the company has primarily acted as an incubator and advisor to aspiring streamers and creators, but brand deals have become an increasingly important element of the company’s business — Oni signs about 10 brand deals every month, according to Oni Studios CEO Daniela Ali — and their services have evolved accordingly expanded to include brand consulting and the growing Metaverse marketing space.

“Creating a dedicated mapmaking team is simply our response to a very real demand,” Hassan said. “I’ve worked on over half a dozen custom maps, and while my contribution to the design and mechanical play of each experience was significant, there’s nothing quite like digging in with your own team and engineering the perfect map.” Oni Studios has only employed Fortnite full-time mapmakers for two months, so it has yet to develop a brand experience from start to finish, although Hassan has provided both engineering expertise and promotional assistance for activations like Honda’s Hondaverse in the past.

While these are still the early days of Metaverse marketing, Hassan’s studio is the latest in a line of dedicated Fortnite development companies that have formed to meet the needs of brands. Over the past year, prominent non-gaming brands like Gillette, Coca-Cola, and Grubhub have joined the feeding frenzy and released their own branded Fortnite worlds. “I don’t think it’s just a fad; I think the Fortnite metaverse, for lack of a better word, is definitely here to stay,” said Michael Herriger, CEO of independent Fortnite studio Atlas Creative. “We’ve got brands coming to us all the time that are interested in creating spaces and it’s going towards a trend that brands don’t just want a one-off game mode, they really want a place in the virtual space of Fortnite and have those long-term experiences. “

What sets Hassan’s studio apart from the competition is its ability to seamlessly distribute the worlds it builds. When it comes to virtual brand activations within platforms like Fortnite and Roblox, the rules are a bit different than traditional media. A brand can’t just dump content on a platform and watch views soar; real commitment and participation in three-dimensional brand worlds are necessary for them to be worthwhile. Hassan’s position as a well-known Fortnite creator allows him to share his company’s activations on his Twitch stream and social feeds, a strategy he has used to promote the recent Hondaverse activation.

“That’s the draw for the mapmaking team at Oni Studios — the fact that we have both the influencer and the suite of services to build these creative experiences,” said Ali, who is married to Hassan and a celebrity influencer in her own right is. “We find it very valuable when the brands, the influencers and the service providers are all aligned with their vision and their goals, and this whole model facilitates that.”

The presence of a prominent Fortnite influencer is also a potential draw for the veteran mappers Oni Studios has hired and hopes to hire for its new division. The Fortnite creative landscape is teeming with freelance developers who have more freedom to choose their projects – and the potential for higher pay – than developers under the Oni Studios banner. But working with Oni Studios gives creators the opportunity to share their work with Hassan’s millions of fans, in addition to benefits and more consistent pay. “When I was introduced to Oni Studios and the amazing people who work there, the opportunities and goals they set out aligned perfectly with mine,” said Jordan “eatyoushay” Frenkel, one of the full-time Fortnite developers at oni

Although Hassan provided mechanical building advice for the Hondaverse activation, most of the actual development for this experience was done by Fortnite independent studio BeyondCreative. Still, Honda’s use of Hassan’s strong following to drive activation – the distribution end of Metaverse marketing – demonstrated the power of Oni Studios’ combined model. “SypherPK has a large following within Fortnite,” said Phil Hruska, Head of America’s Honda Media Division, “so he was the ideal choice to build the Hondaverse within the Fortnite Creative map mode while leveraging high-quality graphics and ability to create a detailed replica of the all-new Honda HR-V.”

The company’s Fortnite division isn’t solely dedicated to this type of experience. It is also used in creating exclusive experiences for Hassan’s community, as well as training developers in Oni Studios’ incubator class. But as the number of brands scrambling to lay claim to the metaverse continues to grow, partnerships remain Oni Studios’ top priority.

“It’s no surprise that I have a great passion for Fortnite and believe strongly in the capabilities of the Unreal Engine,” said Hassan. “It takes their creative mode light years ahead of other platforms and allows us to design much more mature, immersive and engaging experiences.”