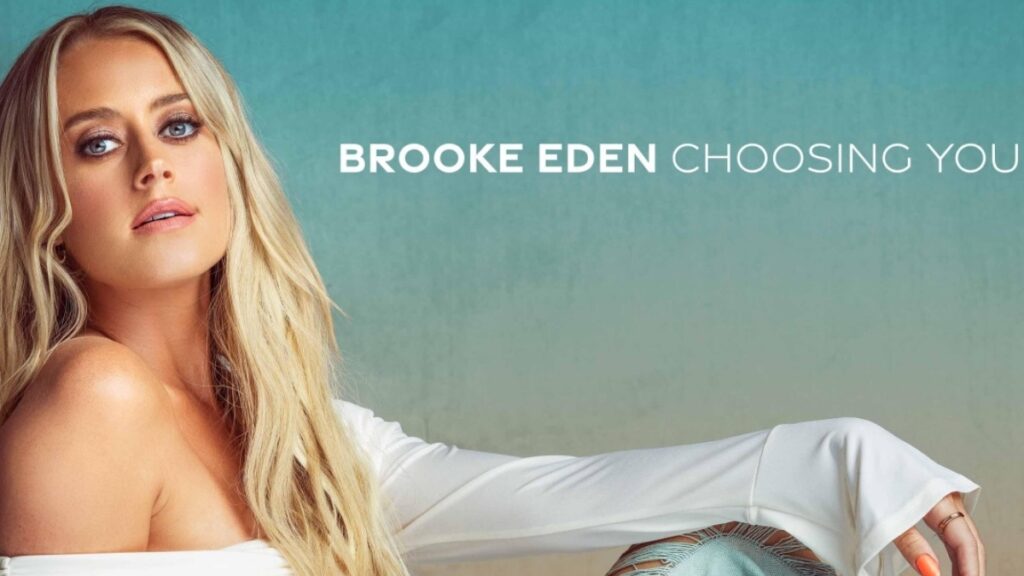 Brooke Eden returned from a self-imposed hiatus last year with a trilogy of summer songs, happy, healthy and eager to re-establish herself as one of country music’s brightest emerging artists. Since then, Eden has been involved in many projects promoting LGBTQ+ issues and has played countless shows and events including this year’s CMAFest. She has also stepped back into the Opry circle and is now set to release a new EP, Choosing You, on July 29th. We were thrilled to take some time with her to discuss all of this.

Nice to speak with you today. Thanks for your time.

Thank you for speaking to me.

It’s a busy time for you with new music on the way, but before we talk about Choosing You, let’s talk about two big things from the last month. First, how was your CMAFest? We saw you sing the national anthem on the Riverfront stage!

That’s great! Oh man, CMAFest is always like a family reunion. You meet so many people along the way and they’re all in Nashville for that one week of the year! It’s always so good to share and see other artists you love and respect.

I like to do my shows and then hop around and see my friends too.

They played the Opry just before CMAFest. How was it? are you still nervous

I got to play ‘Left You For Me’ there, my new song, just before the CMAFest. We debuted it there on its release day, June 3rd.

I still get nervous stepping into that circle every time! (laughs) It’s funny because I feel like I don’t really get my nerves almost anywhere else. I think this was about my twentieth time playing the Opry. The Opry band is like my family now and it’s definitely a comfort to me, playing the Opry and singing in circles will always draw that kind of respect that should make you a little nervous.

Your new EP “Choosing You” will be released on July 29th. Is the title about loving another person or choosing to love yourself?

Isn’t that the question? (laughs) Well, two of the songs on the EP are self-empowerment songs and are about self-love, and the other three are love songs about someone else.

When I was thinking about what to call this EP, it was interesting because the theme of self-love had come through quite strongly, but also the theme of choosing a partner that would allow you to love them and yourself at the same time. I looked at my fiancee and realized that when I chose her, I also indirectly chose to love myself, so there’s the title! It felt like this title encompassed the whole project and not just a song or two.

I know you saw the three songs and videos you released last year as more of a summery trilogy. How are these new songs different?

Tell me about the inspiration behind Left You For Me.

The song is about getting out of a bad situation so you can become the most authentic and best version of yourself. For me, the song is about stepping out of my family’s expectations of who they thought I was going to be left behind. Once I settled into who I was and who I am my family understood but there was a while before that where they wanted me to be a specific person and I just wasn’t them, I tried but I knew that I had to choose me in the end to find happiness.

The first step in choosing yourself is to move beyond that toxic energy that you know is just not you. “Left You For Me” feels like the first step in this new chapter of my life.

You must have received some lovely messages from women, and maybe men, about the self-empowering nature of Left You For Me?

Oh my god yes I did! It was so cool to see it on TikTok and Instagram. I had a message from someone telling me that the song was the trigger for them to leave an abusive relationship. Being a part of this life for someone makes me very emotional.

It was amazing for me to see how this song affects different people. For me it was about my family’s expectations of me, but for many other people the song has played into it in terms of bad relationships or drugs and alcohol. Good songwriting allows people to infuse their own stories and experiences into what you’ve written and we seem to have achieved that with “Left You For Me”.

Let’s talk about the other songs on “Choosing You”. I say the title and you give me a brief synopsis of the song!

‘Beat’: This is my big sister’s song. It’s from the perspective of someone who has been through something and is passing their wisdom on to someone else.

“Comeback Love”: This is about a cheeky woman who thinks she is too independent to love anyone else, and then love hits her in the face!

‘From the soil’: This song has ‘I Wanna Dance With Somebody’ vibes! It’s about being in a room with a thousand people, but only seeing that one person you’re there with, encased in your own world.

Where will the EP land sonically?

I grew up listening to 90’s country, but I’m also a big fan of 60’s and 70’s soul and Motown. I wanted to try to find a way to combine these two different sounds. There’s a lot of steel guitar in this project and it’s all tied together by the music that has influenced me throughout my life.

They have also worked with the Recording Industry Association (RIAA) on the Music Matters project. Tell me a little bit more about it?

I feel that music is a common thread in everyone’s life. It is everyone’s language. You don’t have to understand what music is saying in order for you to feel something. Music has been such a good force in my life, it has helped me to heal and I wanted to pass that experience on to little kids, to people in the hospital, to people involved in something in their lives.

We want music to be a healing force and to help people overcome difficulties in their lives. It’s been a really cool partnership so far. I spoke to Congressman David Cicilline in Washington DC, who chairs the Equality Caucus. It’s amazing to hear what they are doing in DC to create equality for all – did you know that the LGBTQIA+ community is still the only community in America whose discrimination is still legal?

I just did a girls camp here in Nashville where I got to talk to girls ages 8 to 14 about music and captaining your own ship, which was really cool. They had so many insightful questions and so the Music Matters project is a way for all of us to unite and heal. It is important to me. A passion and what I love – music has saved me in so many ways that I want to give that back to people.

Have you been encouraged by Nashville and the industry’s response to you and other LGBTQIA+ artists over the past few years?

Yes. We’re in this new area of ​​country music right now. It’s a place that I really, really love, and there’s a lot of country music that I love too. It’s been a while since I could really say I think. It’s great not only to be able to release new music now, but to be able to release new music as who I really am has empowered me. It created a completely different experience for me and I feel very supported by Nashville and the gatekeepers here, supported also I should say by the fans who have been amazing. I look forward to releasing new music and giving them much more in the future!

Brooke Eden’s Choosing You EP is out Friday, July 29th on all platforms