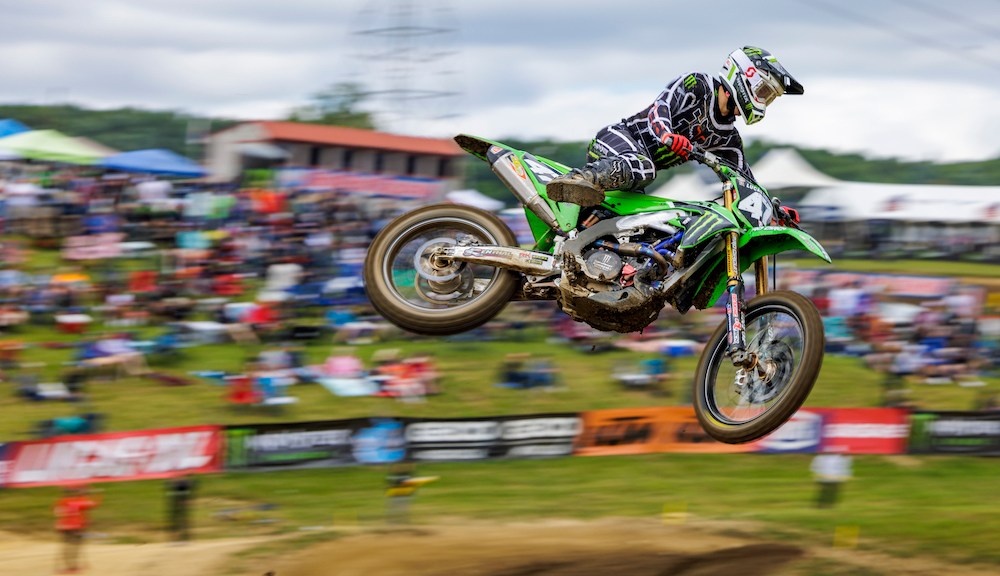 At the opening round of the 50th Anniversary of the Lucas Oil Pro Motocross Championship at Honda Fox Raceway in Southern California, an announcer’s voice blared over the facility’s PA system.

“And it does! Monster Energy/Pro Circuit/Kawasaki’s Seth Hammaker just finished the clock with a lap of 2m13.063s and that’s good enough for first place in qualifying for tonight’s 250cc National here in Pala!”

And so Hammaker kicked off his 2022 Lucas Oil Pro Motocross Championship season, the sophomore racer who ultimately posted 8-5 moto results for seventh overall on the day. And he’s battled on ever since, finishing an average eighth place in the first 16 races of the natural terrain campaign.

It’s been a stellar and consistent year for the #47 rider, having competed in just two Outdoor Nationals in 2021 and just two 250SX West Region Supercross main events in 2022.

Q: You got off to a great start in the Lucas Oil Pro Motocross Championship, qualifying quickly and then going seventh overall at Pala…

SETH HAMMAKER: It’s been a while since I’ve raced due to injuries and stuff. It was kind of unknown where I was, especially outdoors. I haven’t really ridden outdoors that much and when I went to Pala I felt like I didn’t know where I belonged. I knew I had prepared well before and after Pala. I was confident in the work I had done and I believed in myself and went out and did my best.

It was a big confidence boost. A lot had to be learned in the first laps. I felt like I was driving pretty well. On some of the first laps I went a little tight while riding up front and just got some arm pump just from not riding that up front in a while. And then when I got a few more races and a few more laps under me, I felt better about it. You learn so much from running up front with these guys, so that was pretty cool.

Q: And with the workouts, I assume that for the first time you go out and do a few laps on these courses and start figuring out how to line up sections and what not.

SH: Yeah, especially with these new tracks that I’ve never been on. It’s just difficult to learn super fast, and it’s also difficult to do a fast lap.

Q: You finished seventh overall at Pala with 8-5 moto results. From there you started posting the top 5 and top 8 moto results. You had to realize that you can do it and gain confidence?

SH: Yes, sure. The confidence definitely came from running forward and then at that point I said to myself, ‘Okay, I know I can have good starts and when I’m up I know I can run with these guys. “ When it all started, I was more confident with my driving.

And here, too, things are getting better and better. The more laps I do, the more confident I become. And at some tracks you have a lot of different track conditions. For example, you have the Southwick sand. This was my first time going there and that track was super gnarly. And then there was Hight Point, which I had only ridden once before. It’s more of the dirt I grew up on and more comfortable with, so that was pretty cool. In these races you also have to have a good Racecraft and I think the guys at the front are really good at that. You can manage the race from the front. They don’t overdo it where they are spent at the end of the race.

Also, the biggest thing I’ve learned is changing different lines during motos. For example, if a line gets rough, you need to move. It’s like you’re not going to keep pounding that line or it will take a toll on you. If you lose a few tenths on each moto, it adds up over the entire moto. It’s all about learning all those things, and Racecraft is definitely important.

Q: How do you rate your competition? They are at the top with standout classes Jett and Hunter Lawrence, Joe Shimoda and Justin Cooper.

SH: Yes, they are definitely very fast and talented. Every time I start at the front I see a lot of things I learn from them. Especially Jett Lawrence. He’s pretty patient out there in these motos. In the first laps of the race he is quite patient. He gets his lines straight and then I can tell he doesn’t really rush things early in the race and then once he gets comfortable he starts just ripping off the guys. When he comes forward he immediately creates a gap and maintains that intensity for most of the 35 minutes. It’s not easy, and we’ve been working on that. These guys are no joke and I look forward to fighting more with them.

SH: Yes, I am. He helped me a lot, especially in the outdoor races. He really helped me here with my first full season outdoors. He was of great help in giving me insight into many things that have helped him in the past. Yes it worked well and I really enjoy working with him.

Q: How are you enjoying riding for Mitch Payton and Team Monster Energy/Pro Circuit/Kawasaki?

SH: Yes, it’s great. The whole team over there is just great because they want to win as badly as I do. Everyone there has the same goal and they give me all the tools and knowledge to succeed and be the best to the best of my ability. It’s cool. I have good teammates and everyone is ready to push each other and get better. Obviously Monster Energy/Pro Circuit/Kawasaki is the team to ride for and I’m super grateful to be there and to ride for them.

Q: Your next stop will be Unadilla National in New Berlin, New York. Have you been there and what do you think of the track?

SH: Yes, Unadilla is up next and that’s a track that I’ve actually visited in the past and really enjoy. It’s super rippled there and quite technical. They also have some high speed sections and a lot of elevation gain. It’s one of the circuits that I love to visit and you definitely need to know how to ride the ruts there. I think it’s going to be a good weekend and I want to get on the podium there.