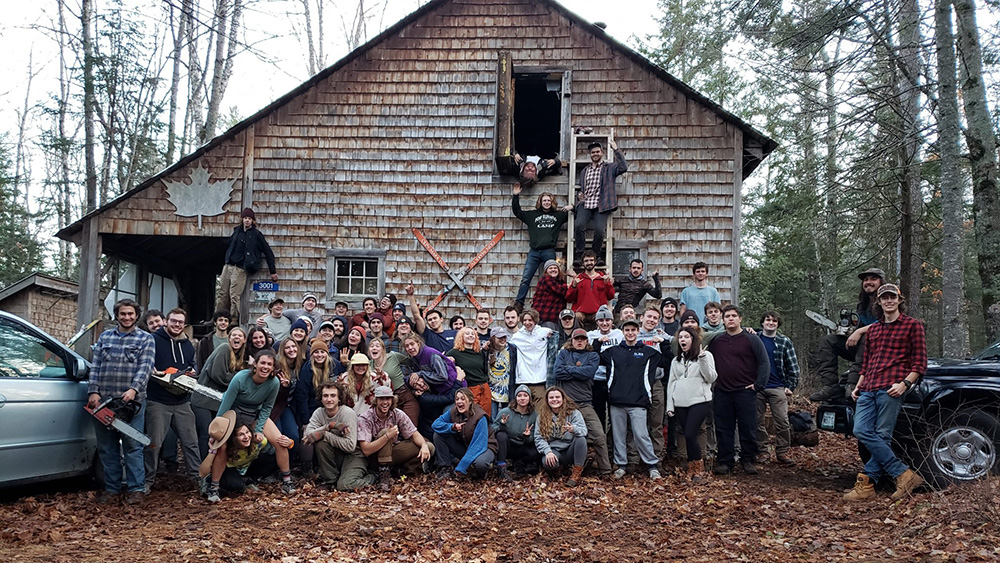 Maine Outing Club’s cabin in the Carrabasset Valley near Sugarloaf Mountain was selected for renovation by the Magnolia Network’s Maine Cabin Masters. Now the University of Maine club is raising funds for the $20,000 needed to complete the renovation before September 1st.

Maine Cabin Masters is a docu-follow television show on the Magnolia Network (formerly known as the DIY Network) that documents the restoration and renovation of Maine cabins by the Kennebec Cabin Company, which is run by contractor Chase Morrill, his designer sister Ashley Morrill, and their carpenter is managed by husband Ryan Eldridge, along with carpenters Jared Baker and Matthew Dix round out the team. The show debuted on January 2, 2017 and wrapped up its seventh season earlier this year.

The Maine Cabin Masters receives thousands of applications each year from cabin owners wanting to compete in the show. Orion-Bay Tucker, treasurer of the Maine Outing Club, said the student group entered their booth as “a shot in the dark” when a former member’s father suggested they apply. Tucker says he and the other club leaders thought the renovations would be a great way to celebrate the club’s upcoming 100th anniversary in 2023 if they weren’t selected.

Club members were shocked – and delighted – to learn their booth had been selected.

The Maine Outing Club cabin is an important part of the varsity club’s history. The original 1926 booth at Chemo Pond was used as an off-campus retreat to teach basic camp skills before the building was moved to Orono in 1938. The club’s cabin went through several rounds of demolition and rebuilding on campus until, in 1958, the club leased land near Sugarloaf Mountain from the Scott Paper Company to build a cabin that would serve as the central hub for club ski trips. Tucker says the cabin hosts dozens of students each winter.

“We as a club just want to get more people to experience the outdoors and we do a really good job with that in the fall and spring, but it’s difficult in the winter,” he explains. “One of the highlights of the club was the cabin and access to Sugarloaf Mountain and the camaraderie that comes with it.”

Tucker says the cabin has always been bare, but the club applied to the Maine Cabin Masters with the goal of addressing basic structural issues to ensure a safe and fun student bonding experience — like replacing the sagging foundation and swapping out propane lights for electricity, Improving the insulation and ensuring the fire escapes work on the top floor.

However, Tucker says the Maine Outing Club has told the Maine Cabin Masters they hope to keep the simple charm that makes the cabin special.

“It’s special because it’s this rustic four-walled wood structure that has been degraded over the years but really doesn’t have the memories that people have there,” says Tucker. “When we spoke to them, we said we wanted to keep that culture, so we advised them to keep as much intact as possible, but just make it structurally sound. They’re doing a few extra things but they haven’t told us because they want it to be a surprise.”

The Maine Cabin Masters began renovations on June 21 and is expected to be complete by September 1. The cabin episode will air next season.

“Maine has a long tradition of outdoor sports and recreation, and many of our team are University of Maine graduates. We are proud to be involved in the preservation of such a unique cabin that is part of the past and future of so many Mainers,” said Chase Morrill.

The agreed budget for construction was set at $20,000 for labour, materials and other renovation costs. Tucker hopes local businesses will participate, as well as UMaine alumni who have enjoyed the booth in the past. Any additional money collected before the end of construction goes towards “wish list” items requested by the students that don’t match the necessary structural upgrades.

“When we posted about it at the Maine Outing Club on Facebook, there were so many comments like, ‘Oh, I lived there practically in the 80’s,’ ‘I remember splitting wood,’ ‘I remember that I met the love of my life here,” laughs Tucker. “It’s cool to scroll through the comments and see how little the dressing room has changed.”

To donate, visit the Our UMaine campaign site.