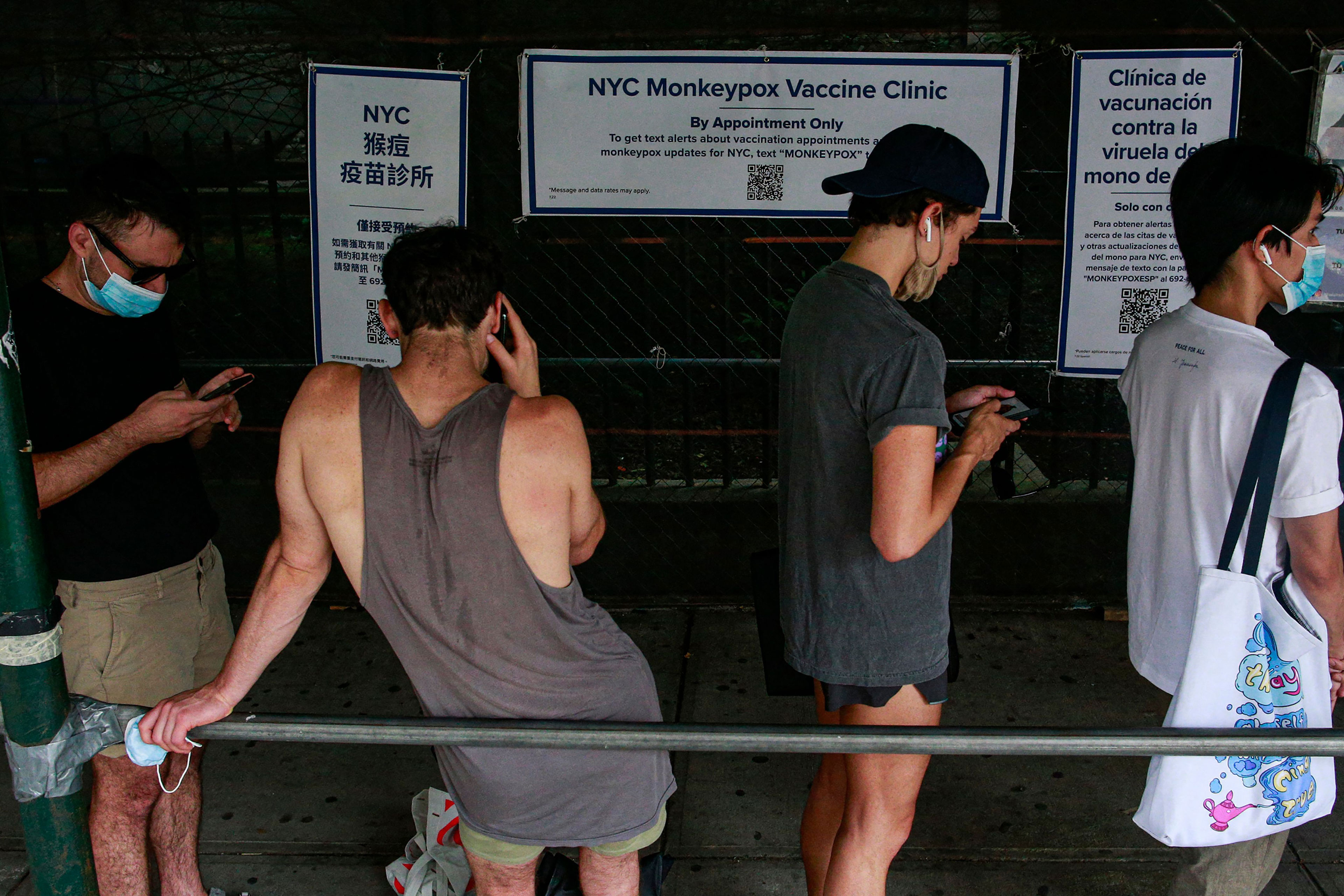 On July 23, the World Health Organization declared monkeypox a public health emergency of international concern. It was a controversial decision, with WHO Director-General Dr. Tedros Adhanom Ghebreyesus, who made the final decision and overruled the WHO Emergency Committee. The advisory committee’s disagreements reflected debates that have unfolded among officials, on social media and on opinion sites in recent weeks. Is monkeypox a public health emergency if it spreads “only” among gay and bisexual men and trans women? To what extent do other population groups have to worry?

Behind these questions are concerns about stigma and how best to use scarce resources. However, they also reflect an individualistic understanding of public health. Instead of asking what the monkeypox outbreak means for them now, the public could ask how the monkeypox outbreak might affect them in the future and why and how it might be contained now.

The longer monkeypox transmission remains uncontrolled, the more likely it is to spread to other populations. There have already been a handful of cases in women and a few cases in children due to household transmission. In otherwise healthy people, monkeypox can be extremely painful and disfiguring. But in pregnant women, newborns, young children, and immunocompromised people, monkeypox can be deadly. These groups would all be at risk if monkeypox took hold in this country.

Stopping transmission among men who have sex with men will protect them now and in more vulnerable populations in the future. But with a limited supply of monkeypox vaccine available, how can public health officials best deploy vaccines for equitable effect?

Vaccinating close human contacts with monkeypox will not be enough to stop the spread. Public health officials have not been able to trace all chains of transmission, meaning many cases go undiagnosed. Meanwhile, the risk of monkeypox (and other STDs) is not evenly distributed among gay and bisexual men and trans women, and targeting all would exceed supply. Such a strategy also carries the risk of stigmatizing these groups.

The Centers for Disease Control and Prevention recently expanded eligibility for the monkeypox vaccine to individuals who know a sexual partner has been diagnosed with monkeypox in the past 14 days or who have had multiple sexual partners in the past 14 days in a jurisdiction with known cases of monkeypox. However, this approach is dependent on people having access to testing. Clinicians test a lot more in some jurisdictions than others.

Alternatively, public health officials could target monkeypox vaccinations to gay and bisexual men and trans women who have HIV or are considered at risk and who are eligible for pre-exposure prophylaxis or PrEP (drugs used to prevent HIV infection). Finally, there is much overlap between these populations and those at risk for monkeypox. But only 25% of people who are eligible for PrEP in the US are prescribed PrEP, and that proportion drops to 16% and 9% for Hispanic and Black people, respectively. This approach risks overlooking many at-risk individuals and exacerbating racial and ethnic disparities.

Because of this, some LGBTQ+ activists advocate more aggressive outreach. “We’re talking about two types of surveillance,” said Gregg Gonsalves, an epidemiologist at the Yale School of Public Health and a longtime AIDS activist. “Passive surveillance where I show up at my doctor’s office. Active surveillance is where we go, and we actively look for cases by going where people are. There are parties, social gathering places, sex clubs where we could do monkeypox testing.”

This will be particularly critical outside of gay-friendly cities, where both patients and providers may be less informed and gay sex is more stigmatized.

Inequalities in access to monkeypox vaccines have already emerged in New York City, the epicenter of monkeypox in the United States. The city’s health department offered appointments for the first doses of the vaccine through an online portal and advertised them on Twitter. These initial doses were administered at a sexual health clinic in the affluent Chelsea area.

“It was the middle of the day,” said Gonsalves. “It was in a predominantly gay white neighborhood. … It was really aimed at a demographic that will come first to everything. That’s the problem with relying on passive surveillance and people coming to you.”

Michael LeVasseur, an epidemiologist at Drexel University, said: “The demographics of this population may not reflect the group at highest risk. I’m not even sure we know the highest risk group in New York City right now.”

Granted, three-quarters of the city’s cases have been reported in Chelsea, a neighborhood known for its large LGBTQ+ community, but that also reflects awareness and access to testing. Although more laboratories are offering monkeypox testing, many clinicians are still unaware of, or unwilling to test patients for, monkeypox. They must make a strong commitment to getting tested, which disadvantages already marginalized populations.

The Department of Health opened a second vaccination site in Harlem to better reach communities of color, but most of those accessing monkeypox vaccines there have been there white men. And then New York City took off three mass vaccination sites in the Bronx, Queens and Brooklyn, which were only open for one day. To get the vaccine, one had to be in the know, have the day off, and be willing and able to queue in public.

How can public health officials do the active surveillance Gonsalves talks about to target monkeypox vaccination fairly and to those most at risk? Part of the answer may lie in efforts to map sexual networks and the spread of monkeypox, such as the Rapid Epidemiological Study of Prevalence, Networks, and Demographics of Monkeypox Infection or RESPND-MI. Your risk of exposure to monkeypox depends on the likelihood of someone in your sexual network having monkeypox. For example, the study may help clarify the relative importance of group sex at parties and large events compared to dating apps in spreading monkeypox on sexual networks.

“Given that vaccines are so scarce, a network map can show us the key demographics of people who need to get a vaccine first, not just to protect themselves, but to actually slow the spread,” said Joe Osmundson , molecular microbiologist at New York University and co-principal investigator of the RESPND-MI study.

A racial divide in vaccination rates emerged during the initial stages of Covid-19 vaccine rollout, when vaccines were administered in pharmacies and mass vaccination centers. Public health officials bridged this gap by meeting people where they were, such as in accessible, community-based settings and through mobile vans. They worked hard with trusted messengers to reach people of color who may be suspicious of the healthcare system.

It is not new for public health officials to meet members of the LGBTQ+ community where they are. During an outbreak of meningitis among gay and bisexual men and trans women in 2013, health officials across the country developed relationships with community LGBTQ+ organizations to distribute meningitis vaccines. Unlike New York, Chicago is now using these relationships to vaccinate people at highest risk for monkeypox.

Massimo Pacilli, deputy disease control officer in Chicago, said: “The vaccine is not indicated for the general public or anyone [man who has sex with men].” Chicago is distributing monkeypox vaccines through venues like gay bathhouses and bars to target those at highest risk. “We don’t have to sort out when people are present because we do that upstream by doing the outreach in a different way,” Pacilli said.

The monkeypox vaccine “is intentionally decentralized,” he said. “And for that reason, the routes by which each individual comes to the vaccine are also very different.”

Another reason to partner with LGBTQ+ community organizations is to expand capacity. The New York City Department of Health and Mental Health is one of the largest and best-funded public health departments in the country, and in fact it is Difficulty responding quickly and robustly to the outbreak of monkeypox.

“Covid has overwhelmed many health departments and, frankly, they could use the help of LGBTQ and HIV/AIDS organizations” to control monkeypox, Gonsalves said.

But while public health officials are trying to control transmission of monkeypox among gay and bisexual men and trans women in this country, it’s important to remember that monkeypox has been spreading through West and Central Africa for years. Not all of these transmissions have occurred in men who have sex with men. Strategies to control monkeypox must be informed by local epidemiology. Social and sexual mapping will be even more critical but challenging in countries like Nigeria where gay sex is illegal. Unfortunately, wealthier nations are already hoarding supplies of monkeypox vaccines as they have been with Covid vaccines. If access to the monkeypox vaccine remains unequal, all countries will be vulnerable to future resurgences of the disease.

KHN (Kaiser Health News) is a national newsroom that produces in-depth journalism on health issues. Along with Policy Analysis and Polling, KHN is one of the three major operational programs of the KFF (Kaiser Family Foundation). KFF is a donated non-profit organization that provides information on health issues to the nation.

This story can be republished for free (details).