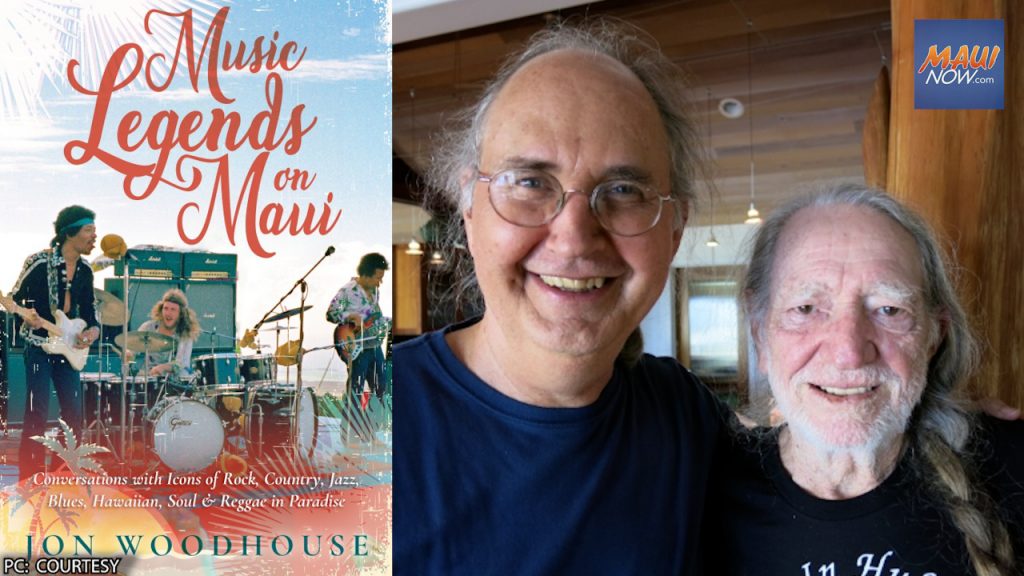 Its author, Jon Woodhouse, says the book presents fascinating profiles of many icons, from Willie Nelson, Prince and Paul Simon to BB King, Herbie Hancock and Joan Baez, with unique insights into their creative and spiritual journeys.

“Here are innovative trailblazers, prophets, revolutionaries, and influential artists who shaped music’s path into the 21st century, many of whom credit how the Hawaiian Islands have influenced them,” according to a press release accompanying the publication is announced.

“I think we all get the energy from the same man and it’s important to spread it out,” Willie Nelson said during an interview included with the book at his Maui home. “As I got older, I began to realize that we feed on each other, and we all feed on the great dynamo in the sky. It’s what makes us all want to get out there and have energy. I think that’s why Hawaii is so good and Maui in particular because it’s where you can come and get what you need, mind or body, whatever is wrong – physically, mentally or spiritually.”

More than 80 interviews are organized into genre chapters beginning with a Maui Nō Ka ‘Oi section dedicated to celebrated artists who live or have lived on Maui. Other sections include Troubadours, California Dreaming, Take Me to the River, Mele o Hawaii, Sundown in Nashville, Rock & Roll Music, Round Midnight, Why I Sing the Blues “. ‘ and ‘Reggae Got Soul’ as well as an extensive bibliography and photos.

“Maui has always been my goal. It’s otherworldly,” Aerosmith’s Steven Tyler said in the book. “The life I have I love the attention and I love playing shows and going places and everyone knows your name but it’s a bit much. The times I come here have been outrageous. I come here and fall on my knees and thank God.”

“What the world needs right now is aloha, and that’s our job. That’s what we project wherever we go and play. If the world had aloha, everything would be fine,” Israel “Iz” Kamakawiwao’ole quoted in the book.

Available on Amazon in paperback, hardcover, and Kindle, the back cover includes praise from Mick Fleetwood of Fleetwood Mac, Pat Simmons of The Doobie Brothers, and Ben Verdery, Yale University guitar professor. The cover features a photo by Brian Byrnes of Jimi Hendrix, who played on Maui in the 1970s.

Jon Woodhouse trained as a teacher at the University of London and taught social studies at Ealing Art College (formerly attended by Pete Townshend, Ron Wood and Freddie Mercury) before moving to America. After moving to Maui in 1980, he became a journalist and has covered entertainment for The Maui News since 1983. He has sponsored concerts (Dylan, Santana, CS&N) and personal development workshops. He also directed the Maui offshoot of the Hawaii International Film Festival.

For a weekly listing of Maui music and other events, see Maui Entertainment, Arts, Community, May 14-20. July and click here.