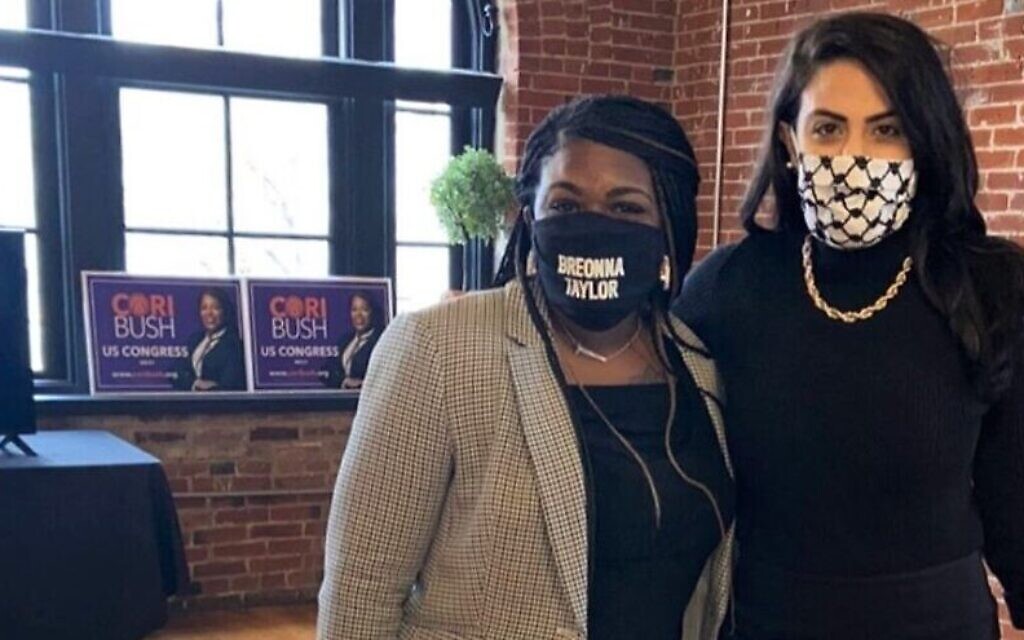 (JNS) Rep. Cori Bush (D-Mo.) is under fire from Jewish groups and her opponent in the upcoming Missouri Democratic primary for fundraising and associating with an anti-Semitic activist who once said she wants “ burn every Israeli” alive.

Neveen Ayesh, government relations coordinator for the Missouri chapter of American Muslims for Palestine (AMP), where she has worked since 2018, has helped Bush organize several fundraisers. The last was on July 16th. She has in the past called for the destruction of Israel and has vowed to take part in it.

“I want to set Israel on fire with my own hands and watch it burn to ashes along with every Israeli in it. Call it what you want to call it idc,” Ayesh wrote in 2014.

During Israel’s “Operation Protective Edge” in 2014, Ayesh expressed his willingness to join Hamas’ military wing, the Izz ad-Din al-Qassam Brigades, writing: “I should join al-Qassam. Be the first woman to join your group lololol #IdLoveToThough.”

“Israel is not Jewish, it is satanic,” Ayesh wrote in 2015. “Israel is an illegal, apostate settler state, a criminal apartheid terrorism that has no right to exist,” she wrote in 2016.

On its website, AMP claims to be a “grassroots” organization that works with interfaith coalitions of Jewish, Christian, and other Muslim groups to educate the public “about Palestine and its rich cultural, historical, and religious heritage.”

However, the Anti-Defamation League describes the AMP as an organization that propagates “extreme anti-Israel views” that “at times has provided a platform for anti-Semitism under the guise of enlightening Americans.”

In a statement to JNS, Canary Mission said that Ayesh’s social media posts are “some of the very worst” they’ve archived on their site. They added that they “showed a deep and consistent hatred of Jews, whether living in the US or Israel.”

“Congresswoman Bush’s tolerance of Ayesh’s anti-Semitism stands in stark contrast to her opponent, Missouri State Senator Steve Roberts, who has strongly condemned anti-Semitism,” said a spokesman for the organization.

“Cori Bush has long known that many of her friends and supporters are anti-Jewish zealots,” Roberts said in an open letter posted on his campaign website. “Instead of walking away, she decided to cash her checks and get on her payroll.”

Roberts is running against Bush in the Democratic primary for Missouri’s first congressional district on August 2.

In the letter, Roberts also said he had a romantic relationship with Ayesh “several years ago.”

“After a period of getting to know her, I realized her point of view and — unlike Cori Bush — I decided to reject hate and walk away,” he said.
“Cori Bush is openly anti-Semitic, and her hatred and ongoing demonization of Israel is unjustifiable and offensive,” Roberts told JNS. “She has repeatedly voted against vital and bipartisan US defense funding to Israel, including the replenishment of the Iron Dome missile defense system, which protects hundreds of thousands of innocent civilians every year,” he said.

“Cori Bush’s lies about Israel are not only irresponsible and wrong. Your words are dangerous because they help fuel the growing and ongoing threat of violence against the Jewish community,” Roberts added.

In a 2018 testimony before the Missouri House of Representatives defending the BDS movement, Ayesh said she’s befriended Jews, worked with them, and that “some of them” are her “closest people.”

According to Ayesh, her “problem is not the existence of Israel,” adding that she “definitely” does not “condone violence.”
However, Ayesh’s Twitter story tells a different story.

In November 2012, Ayesh wrote: “I should put a sign on this door saying if your Yahoodi [Jewish] Please kill yourself because you are not welcome anywhere.”

“#crimesworthyoftherope being a Jew”, “I would love to 7ajer 3al yahood [throw stones at the Jews]’, ‘Never trust a Jew’, ‘#ThingsWeAllHate Jews’ and ‘Jews #WorstThingInTheWorld’ were some of her tweets between 2011 and 2014.

Shortly after her testimony in 2018, Ayesh commented on Facebook on a video she shared of her testimony, writing, “the yahood [Jews] just came across as very aggressive and kept repeating the same things over and over again.”

Most recently, Ayesh compared the invasion of Ukraine to the struggle of the Palestinians, tweeting in February 2022 that many who oppose the actions of the terrorist group Hamas “encourage the armed resistance of Ukrainian citizens … but somehow have a problem with the Palestinians doing the same.” do. ”

Bush’s friendship with the controversial activist dates back to 2017, when the two were photographed together before a panel discussion at the Badil Resource Center in Bethlehem.

Bush herself is a vocal supporter of and a member of “the Squad” alongside Congressmen Alexandria Ocasio-Cortez, Ilhan Omar and Tlaib. Bush previously described Israel’s relationship with the Palestinians as an “apartheid system.” She has also claimed that “Black and Palestinian struggles for liberation are interconnected.”

Several Jewish groups have expressed concern about Bush’s association with Ayesh, including the Simon Wiesenthal Center, which questioned whether Bush shared Ayesh’s worldview.

“What part of this anti-Semitic activist did Rep. Bush not know about? Your desire to see Israel and the world’s largest Jewish community burn and be reduced to rubble? Your support for Hamas terrorism?” said Simon Wiesenthal Center Associate Dean Abraham Cooper. “Do these feelings reflect Cory Bush’s worldview? If not, say so and give the money back!”

StopAntisemitism Executive Director Liora Rez told JNS that Bush’s association with Ayesh was “appalling,” adding that Bush “benefits from someone who wants to watch Israel burn to ashes along with every Israeli in it.”

Ayesh responded to news about her previous social media posts in a July 13 Twitter thread, in which she criticized Canary Mission for documenting her and wrote that she was “harassed” about “horrible things,” she had posted “once upon a time”.

Ayesh justified her tweets by claiming they “came from a place of pain and anger,” adding that she has now “learned to map academic terminology to what I have seen, experienced and continue to do, both at home and abroad.” have experienced”.

Neither Ayesh nor American Muslims for Palestine responded to JNS requests for comment.

“Neveen Ayesh would like to run for office one day and her thread is perfect for understanding a classic journey into modern anti-Semitic linguistics,” Canary Mission said in response to Ayesh’s thread.

“Your anti-Semitism has been consistent from the time you were ‘young and stupid’ to the present day,” the watchdog said, adding. “You keep saying ‘terrible things’. Your non-apology doesn’t work. Nobody buys it.” PJC