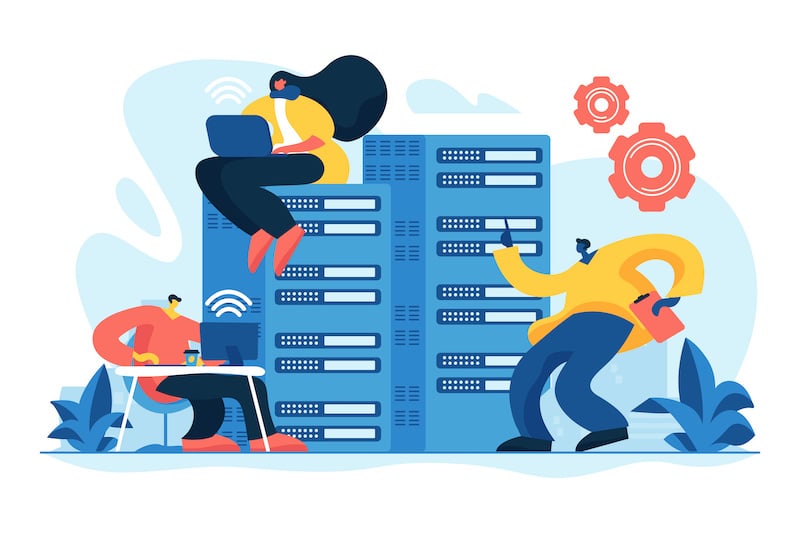 In the beginning, hardware and software existed as largely separate entities. They were both needed to provide computing, networking, and storage. But they kept their distance.

Here’s how the relationship between hardware and software has grown and some of the trends driving the software-defined networking (SDN) market:

The concept of software definition was developed to decouple software from hardware. It made it possible to pool resources and manage them using software.

The development of software-defined architectures has shifted the equation forever, away from buying hardware to then run applications on. This led to software coming into focus. Software became the center of IT solutions. Since then, many areas of the once lively hardware landscape have become standardized. Servers, for example, no longer deserve the same status as they used to.

Software-defined storage (SDS) was the first area to gain a serious foothold in the company. Recently, software-defined networking (SDN) has become very popular. And it is developing into a field of innovation.

According to Dell’Oro Group, demand for these software-defined services and tools is growing rapidly. The analysts said that the expected revenue will generate more than half of $33 billion in total revenue in the network security and services market by 2026.

“Since the introduction of the first network security appliances in the 1980s, the network security market has been dominated by a selection of purpose-built boxes, but we’re seeing a seismic shift,” said Mauricio Sanchez, Research Director, Network Security, Dell’Oro Group.

“Among companies embracing cloud applications and hybrid work as the new normal, we see them prefer SaaS and virtual network security solutions that better serve these use cases.”

Hardware sales were once the bread and butter of the networking space. In the past decade, a wide range of hardware appliances have emerged to take care of various network and network security tasks.

The glory days of the hardware appliance seem to be over. They will not die out as there are still clear use cases where they add value. But sales will gradually decline.

“That’s not to say we’re seeing hardware security appliances go away, but they no longer represent the network security vanguard that they once were,” said Sanchez of Dell’Oro Group.

The rise of ransomware is causing many corporate IT departments to panic. They spend way too much time fighting the latest malware attack or the impact of a user clicking on a phishing email link or attachment. You need help.

SDN provides this support by providing more options to secure the enterprise, lock down the perimeter and extend network security to the very edges of a workforce base now dispersed across disparate mobile connections.

Big winners include SaaS and virtual web application firewalls (WAFs), which play a critical role in helping keep cloud workloads secure. They are expected to experience compound annual growth (CAGR) of 25% between 2021 and 2026

“The driver of the strong growth is the increasing number of business applications being made available over the Internet to both friends and foes,” said Sanchez of the Dell’Oro Group.

He added that SaaS-based Secure Web Gateways (SWGs) should have a CAGR of 23% over the same period as hybrid work becomes the norm. In contrast, traditional physical firewall appliances, which used to dominate the network security sector, have a projected growth rate of 7%. You will still have a place in the company, but SDN will take over.

The urgent need for better network security is met by SDN-related tools. This has led to a new term, the software-defined perimeter (SDP).

Almost every business has remote users and/or third parties who need to connect to cloud or on-premises applications from anywhere. Traditional VPNs for remote users tend to be complex and expensive. However, they no longer offer the security they used to have.